The question of the deepest gorge east of the Mississippi River came from a reader of the “biggest mountains” post. I think it’s a really good question because it addresses another landscape superlative (deepest, tallest, oldest, etc.) that is claimed by several locations in the Appalachians. River gorges and their shape and depth also have a close connection to bedrock geology as well as the overall evolution of the Appalachian landscape. The gorge question is difficult to “definitively” answer because defining the presence and extent of a “gorge,” in terms of its rim or top, can be somewhat arbitrary in many Appalachian settings. Indeed, deeply incised rivers in different parts of the Appalachians look so distinct that you can’t really compare them all at once.

For this reason, I am going to split the gorges between sedimentary rock settings and metamorphic or igneous rock settings. This corresponds to the Appalachian Plateau (and the western edge of the Valley and Ridge) and the Blue Ridge and very western edge of the Piedmont. As you can see from the comparison above, the “background” landscapes into which the gorges are carved tend are different for the distinct geological zones. In the nearly flat-lying sedimentary layers of the Appalachian Plateau, measuring gorge depth tends to be more  straightforward–just go from the river up to where everything flattens out a bit. In practice, even this can get complicated, but it is still a different exercise from looking at the metamorphic and igneous rock landscapes to the east.

The Blue Ridge and Piedmont examples are much tougher to define, so I tried to put together some baseline rules. I used a straight line measurement from river level to the highest point I could find without 1) crossing a tributary stream or 2) going back downhill across a gap or sag.

In all settings, the stream whose gorge is in question must be a through-going, bedrock river that is large enough to be at least recreationally navigated. This is admittedly “un-scientific,”  but it’s intended to exclude headwater streams and their tributaries that actually rise in the area of topography where a depth measurement would take place (this is also just a blog). Even with these rules put in place, naming a deepest gorge in the Appalachians is still very subjective and nearly impossible to do when you actually think about the process of gorge development. I’ll mention this again after some top candidates are listed. At the end of the day, the point of this blog is mostly to talk about the size and shape of some Appalachian landforms and how they relate to bedrock, so an unequivocal “deepest” winner doesn’t matter anyway!

I pass through here occasionally and have not seen any historical markers mentioning gorge depth, but it is regionally impressive here. This point is on the south side of the river, opposite the confluence of the Blackwater River. This is actually the point at which the Dry Fork of the Cheat changes its name to the Black Fork of the Cheat. Interestingly, if you apply the rules I will use for the Blue Ridge examples, you might squeeze out a number a touch closer to 2,000 ft a bit further up the Dry Fork, but the ground length distance is also a bit longer. I think this second location stretches the definition a bit, but the whole point of writing this is to show trends resulting from geology. The fact that they are pretty much the same number and within a few miles of each other on the same river is good enough for me. These numbers are effectively equal to number 2, which is interesting.

This location is one of the exceptions to the “flat gorge rim” concept within the Appalachian Plateau. Around Hinton, the rock layers have been ever so slightly tilted by folding, and this gives the landscape some more defined high points that continue to survive right next to the river. Geologically, this setting has a lot in common with the Black Fork and Dry Fork locations. Further up and downstream, New River Gorge depth remains around 1,500 ft for a considerable distance. A notable location in the Valley and Ridge is at Narrows, Virginia, where the New River passes through the East River/Peters Mountain ridge. I think you would see comparable numbers to Hinton here, and you would also have to use the “Blue Ridge Rules” because the structured rock makes a different style of landscape. Even so, I think Hinton still wins.

Breaks claims the “deepest gorge (or canyon) east of the Mississippi” title, but the overall distance from river to high point on gorge rim just won’t exceed the numbers farther north. That said, the inner parts of the Breaks Gorge are ridiculously steep…that’s the 1,300 ft in 0.56 miles part. This involves lots of cliffs, and is seriously impressive. To get the 1,900 ft number, you have to measure all the way to a high point on the Pine Mountain ridge, which is arguably well away from the gorge proper. Either way, this one certainly gets a nod for extreme gorge topography east of the Mississippi.

If you were floating down the Nantahala River, you could hop out of your boat just upstream of the quarry and climb 3,200 ft to Cheoah Bald on a perfectly straight path, uphill the whole way, without wetting your feet again. You can’t meet those same conditions anywhere else in Appalachia. It would thus be possible to say that the Nantahala Gorge is the deepest east of the Mississippi, but there are caveats. One is that the gorge is very lop-sided, meaning the elevations on the northwest side (with Cheoah Bald) are much higher than those on the southeast side. It is also important to note that the Nantahala did not carve down 3,200 ft in one fell swoop to produce the feature; its “ancestor” rivers produced a very rugged landscape with significant high points, and the modern Nantahala took care of the last little bit. The end result is a regionally huge vertical distance from river to peak, but it actually results from a more modest episode of gorge-carving within an already rugged, pre-existing landscape. I think this concept applies to all the gorges to some extent, but it’s particularly notable here.

I think the Nolichucky is occasionally referenced as the deepest gorge east of the Mississippi, and its numbers are very comparable to the Nantahala Gorge. The climb from river to high point is overall steeper, but the Nantahala still offers a slightly larger elevation gain. That being said, the two are very similar in their metrics. The Nolichucky Gorge is also lop-sided, although less so than the Nantahala, and its depth also reflects modest geologically recent gorge deepening into an already rugged and mountainous landscape. The layout of the Nolichucky system is quite interesting, and it interacts with a very complex geologic zone just downstream of its gorge. 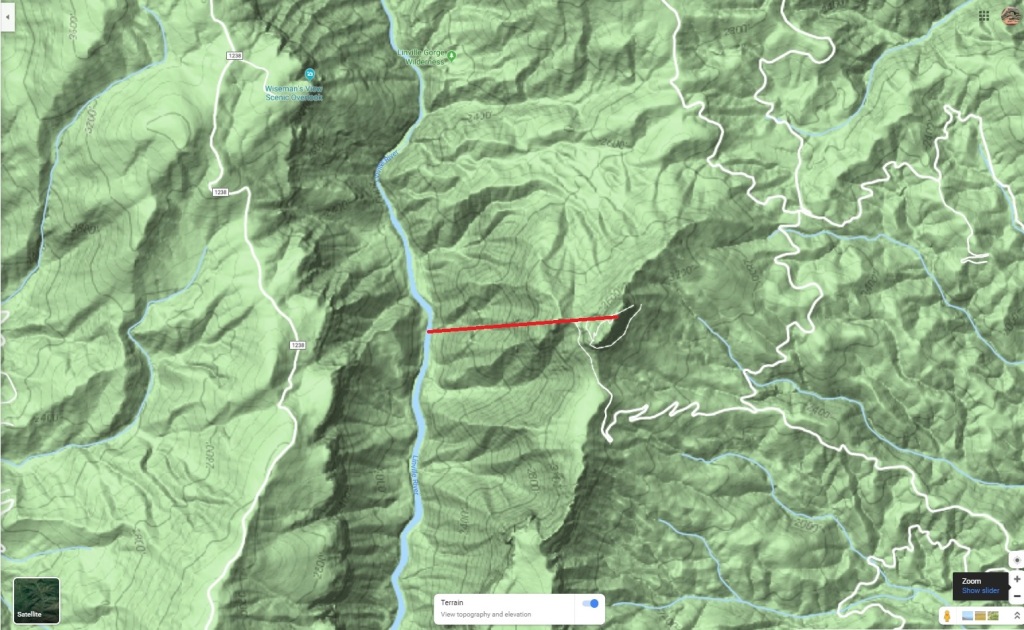 Linville (the title image on this post) is also sometimes referenced as the deepest gorge east of the Mississippi. Its river-to-high point numbers won’t beat the Nolichucky or Nantahala in the way I measured them, but it is SERIOUSLY steep and easily outclasses them in abruptness and ruggedness. From a geologic process standpoint, I think one could argue that more of the distance from river to high point is the result of a fairly geologically recent episode of gorge carving by the Linville River, which is ongoing. Linville’s position on the Blue Ridge Escarpment puts it in a very different process setting than the Nantahala or Nolichucky, so a direct comparison is not totally appropriate. Given its steepness and landscape context, though, I wouldn’t argue with you if you gave Linville some sort of superlative title.

Tallulah Gorge is the most canyon-like feature in the Blue Ridge/Piedmont portion of the Appalachians. While its depth is not comparable to other features in the region, it’s exceedingly steep–comparably so to Linville Gorge, with lots of vertical rock. Like Linville, it is located on the Blue Ridge Escarpment, and I would contend that its depth also reflects a fairly recent and ongoing incision event. The intensity of the rapids and waterfalls in the Tallulah River support this idea, and for its size, the river is certainly one of the steepest rivers east of the Mississippi. While the elevation of the surrounding landscape is presently moderate within the region (1,700 feet or so), Tallulah will continue to deepen in the geologic future if background geologic conditions remain the same (very slow rock uplift in the region, etc.).

DO THE DEEP GORGES HAVE ANYTHING IN COMMON?

For the Blue Ridge/Piedmont gorges…

The role of quartzite bedrock in the Blue Ridge gorges is interesting. It is certainly the most quartz-rich and thus the hardest common rock in the Appalachians, so it will make rugged and locally high topography wherever it occurs.

Despite its hardness, it never occurs in particularly thick masses or over widespread areas compared to the metagraywacke rock discussed in the high mountains post. Additionally, as a type of metamorphosed sedimentary rock, quartzite typically occurs in close proximity to softer and weaker rocks that represent different sedimentary rocks, like shale, that got “cooked” along with it. For this reason, even though quartzite is extremely tough, it can always be “defeated” and crossed by rivers when they eventually gain access to the weaker rock underneath it. The massively thick and extensive metagraywacke occurrences, on the other hand, are less likely to host impressive gorges because large rivers will seldom cut across them. Instead, they are most efficiently eroded away by lots of small but very steep streams that flow to bigger rivers along the edges of the metagraywacke mountain ranges.

WHAT DO THE GORGES SAY ABOUT GEOLOGIC PROCESS IN APPALACHIA?

Lots, and too much to say here. I’ll try to put it in a subsequent post. A few thoughts for now, though…

This is the Tsangpo River Gorge in the eastern Himalaya, in China. The landslide zone  that goes down to the river near the middle of the image is 4,000 ft (1219m) from bottom to top, and it is not very big in the overall context of this gorge!