Earth’s fold-thrust belts produce a variety of large-scale outcrop (and thus landscape) patterns that can be fully appreciated using Google Earth or Google Maps Terrain. Among the most interesting fold-thrust belt landforms are those associated with doubly-plunging anticline structures, which can produce an oval-shaped valley with only one outlet through the encircling ridge through which surface water escapes. The sandbox model shown below produced a doubly-plunging anticline structure, creating the interesting oval near its center. 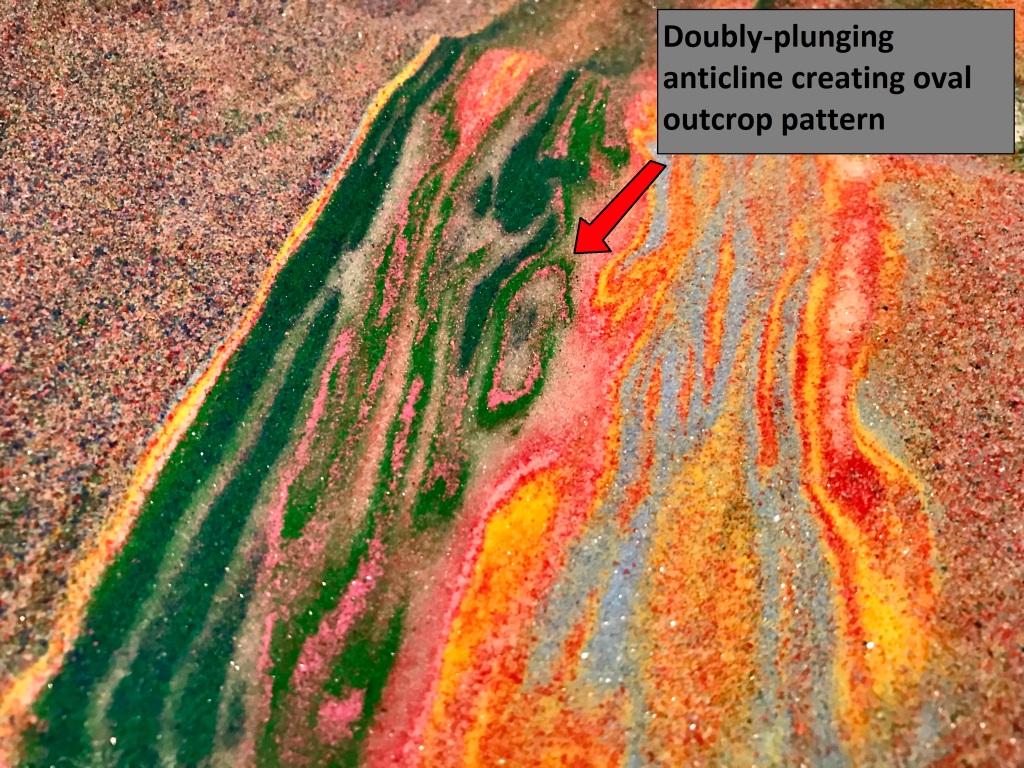 A doubly-plunging anticline is a dome-shaped fold structure associated with a localized  structural high within a given layer sequence, typically related to a distinct pattern of thrust faulting beneath the localized high. During erosion of the fold-thrust belt, the localized high point is exposed and cut by erosion before the rest of the associated layer sequence, producing a closed outcrop pattern instead of the typical elongated outcrop belts, like the ones that dominate the model above. The simple diagram below attempts to illustrate the basic idea.

A good real-world example is Burke’s Garden in the Appalachian sedimentary fold-thrust belt in southwest Virginia (37.102394N  81.353753W). It is shown below in Google Earth; it is even more dramatic in Google Maps Terrain, but I use Google Earth here so the image can be rotated to resemble the model. 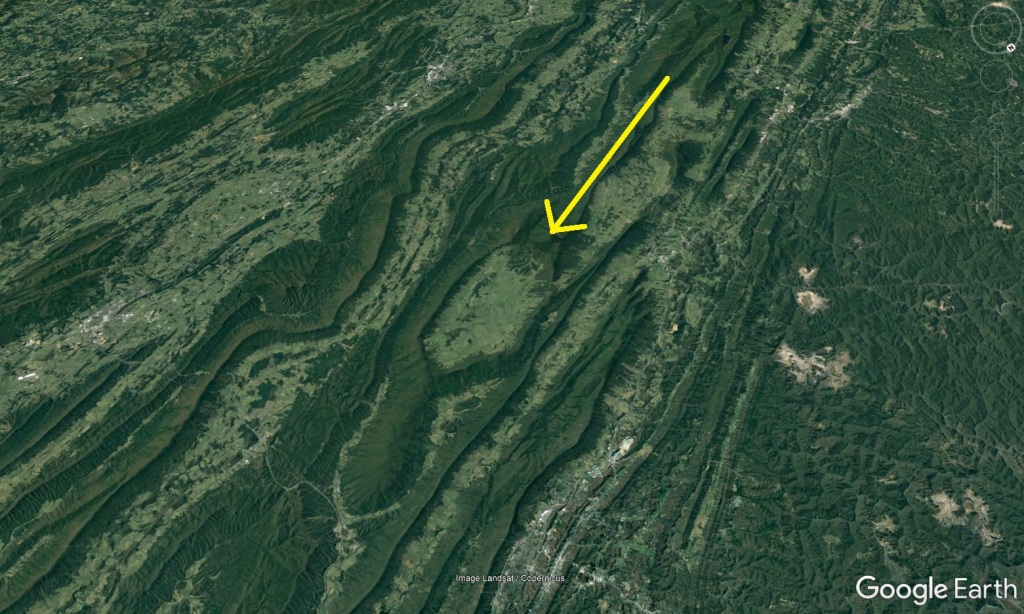 The GIF below shows the development of the model fold-thrust belt that contains the doubly-plunging structure shown above. There is very little evidence of the structure on the surface of the model during its deformation, which is interesting to me.

In the image below, the slightly folded thrust fault beneath the doubly-plunging anticline is drawn. Note how the thrust splits into many splays towards the right side of the model. The sum total of the displacement of these splays should equal the displacement of the fault within the darker layers at left. I certainly haven’t measured this here, but it is important to keep in mind when offsets between different layers appear to be different along a given fault system (in other words, offsets between darker green layers at left are very large compared to individual offsets on fault splays in red-yellow-pink). 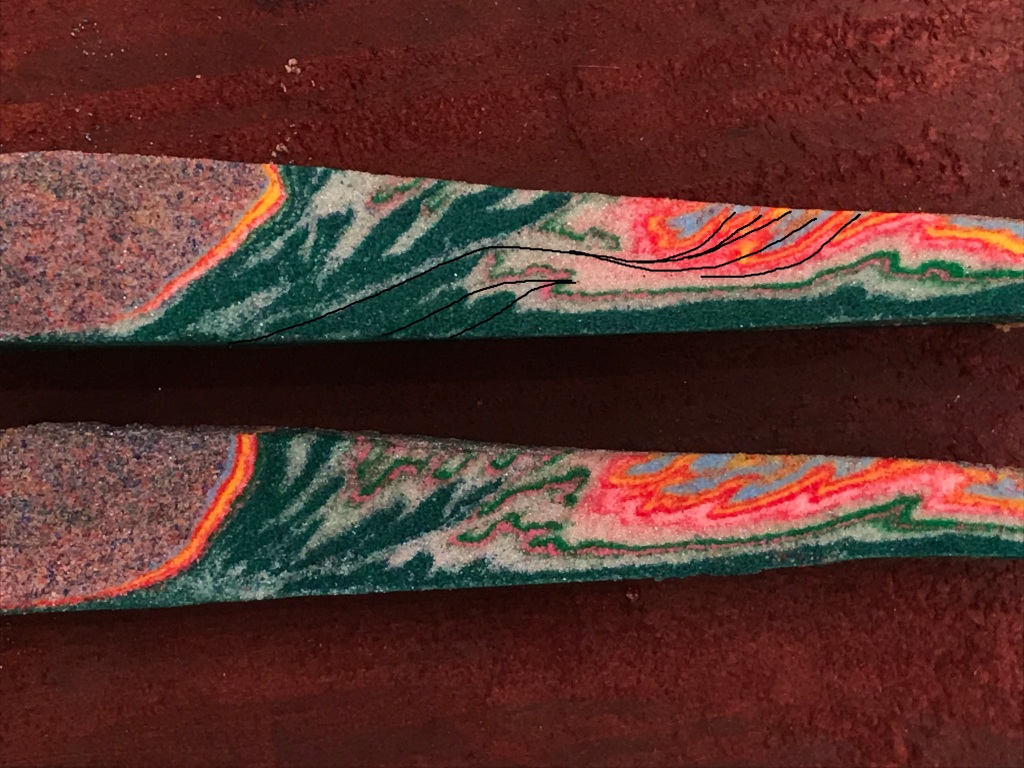 Viewing the upper model slice at an angle provides a “block diagram” perspective and shows one end of the doubly-plunging structure on the surface.

As frequently mentioned in these posts, sand models using granular media will never perfectly replicate ramp-flat-ramp fault styles and associated thrust fault folding. Even so, the cross section of this model is worth comparing to the well-studied Moose Mountain Anticline structure in the southern Alberta foothills of the Canadian Rockies, west of Calgary. The images below are sourced here. Compare the two long sections in the upper image to the overall faulting style in the model, in which single high displacement faults on the thicker (left) side of the wedge split out into many splay strands. Study of this portion of the Canadian Rockies has contributed greatly to present-day understanding of “thin-skinned” structural style. 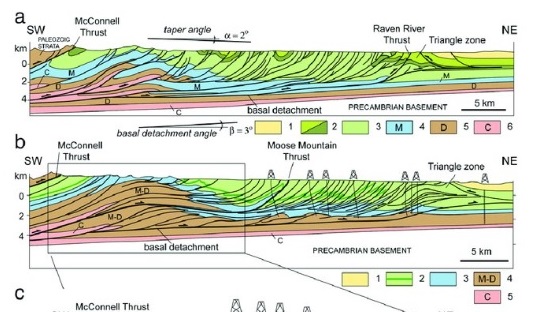 The individual fault displacements in this pattern of the Canadian Rockies are larger than those in the model, allowing folding of true thrust flats and associated arching of entire thrust sheets. The Moose Mountain structure is doubly-plunging, and produces a subtle but discernible outcrop pattern west of Calgary. Searching for the any of the localities visible below will allow you to find this area in Google Maps or Google Earth. The images below are screen shots from my iPhone; the upper image outlines the structure for comparison to the unmarked lower image.

I am pretty sure the pink oval above and right of center in the geologic map below (sourced here) is the core of the Moose Mountain structure–please correct me if wrong! 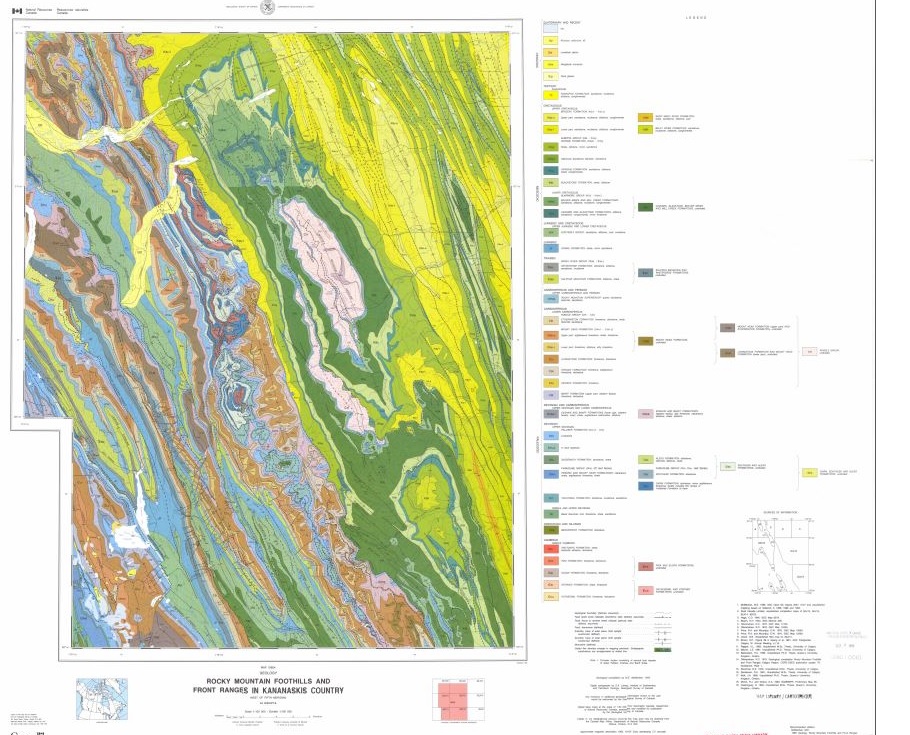 To create the doubly plunging structure in the model, I made a very small high-friction zone in the base plate of the model along which the layers slide during deformation. This small rough spot is not large enough to influence structure along the entire width of the model, but it is does create a noticeable localized effect. In actual systems, local heterogeneities in sedimentary layers undergoing faulting and folding may lead to the development of doubly-plunging fold structures.